Bird migration is in full swing. Every year, thousands of migratory birds are killed illegally in the Balkans. 4th Adriatic Flyway Conference meets in Croatia 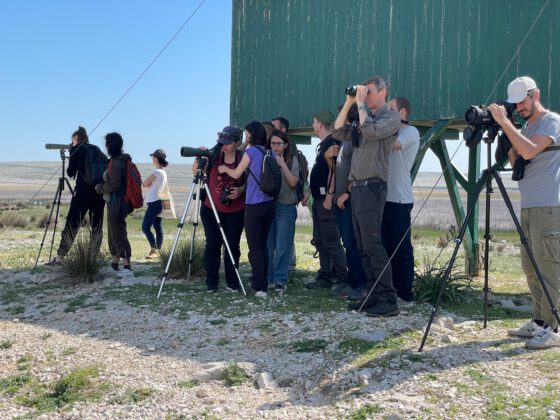 . The Adriatic Flyway along the Balkan Peninsula is one of the major migratory routes on which, twice a year, Europe’s migratory birds fly to Africa, or return to Europe. Bird loss along the Adriatic Flyway is still very high – and would probably be many times higher without the involvement of EuroNatur and its partners. Participants at the fourth Adriatic Flyway Conference, which has been taking place in Zadar, Croatia, since Monday 25 April, are discussing the main reasons for the continued – in some cases dramatic – decline of migratory birds, and are also developing measures to halt the downward trend.

“In times of progressive biodiversity loss, the persistent poaching of migratory birds along the Adriatic Flyway, and in the wider Mediterranean region, is absolutely unacceptable,” said Dr Stefan Ferger, who is responsible for migratory bird conservation at EuroNatur. “Although countries in the region all reaffirmed their zero-tolerance approach to illegal bird killing in 2020, far too little has happened since then!”

In addition to poaching, other human-related hazards await long-distance flyers on the Adriatic Flyway. Electrocution from unsecured electricity pylons and collisions with overhead power lines lead to heavy losses, especially among large birds. There is also the risk of lead poisoning. Many hunters still use lead ammunition for hunting. Birds and animals, which are often just wounded, die in the countryside, and carrion-eaters, poisoned by eating the contaminated prey, die an agonising death. Unfortunately, the use of poison bait to illegally kill wildlife still occurs in parts of South Eastern Europe. Recently, there was a particularly grim case in Bulgaria involving the poisoning of four extremely rare black vultures.

In a joint declaration, EuroNatur and its partners are calling on governments along the Adriatic Flyway to end illegal bird hunting in the Balkans. Furthermore, governments must develop and implement national action plans for bird conservation as part of their international commitment. Conference participants are also calling on leaders to redesign energy infrastructure so that it is safe for birds, and to ban the use of lead shot.

Background information:
• Adriatic Flyway: The water birds of Central, Northern and Eastern Europe concentrate in particular on the so-called Adriatic Flyway, which runs across the Balkans, the Adriatic Sea and Southern Italy to North Africa. A short film on bird migration across the eastern Adriatic can be found here: https://www.youtube.com/watch?v=arJenBAVr10
• The Adriatic Flyway Conferences provide an important forum for bird conservationists from all over Europe to exchange ideas and develop joint projects. The conference currently taking place is the fourth of its kind (following those held in 2009, 2014 and 2018). A detailed report of the 2018 conference can be downloaded here. Short summaries of the presentations given at the fourth Adriatic Flyway Conference can be found here: https://www.euronatur.org/fileadmin/docs/Vogeljagd-Kampagne/AF4_Book__of__Abstracts_FINAL.pdf
• More on EuroNatur’s bird conservation projects: https://www.euronatur.org/en/what-we-do/bird-conservation-in-europe/our-migratory-bird-projects
• A joint declaration signed by all 73 participants was adopted today at noon in Zadar. The paper can be found here.