The silver light ruled over the world, casting into silence those invisible devils that freeze the sailor’s blood when their screams were heard coming from the rocky islands.

Years ago, when the world was still explained through legends, the sailors liked the full moon nights at Lastovo: the silver light ruled over the world, casting into silence those invisible devils that freeze the sailor’s blood when their screams were heard coming from the rocky islands. 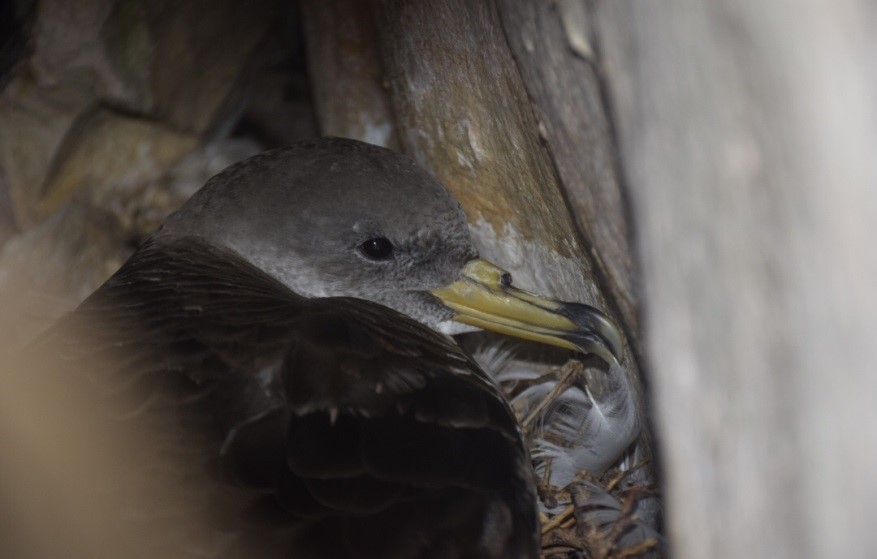 The same before as now, the shearwaters do not like the full moon nights at Lastovo: the silver light rules over the world, exposing them to their predators. So, at their rocky islands, they remain silent, looking outside their narrow nests, mere holes in the rocks, not singing with their high-pitched voices, that more than to devils remind of the shrieking of some scandalized middle-aged woman. But since they choose the darkness for their gabble, who could blame the sailors for fearing their voices when sailing the Adriatic Sea in the middle of the night? Our wild imagination would create monsters just for to crossing the path that separates our bed from the bathroom!

Then morning arrives and even if the air is cold, still the amber of sunshine warms the flesh through the eyes. Maybe thr sea will be calm, purring like a cat, slightly broken in thousands of mirrors. A boat will rip the water, leaving behind a frothy white blood groove. And seabirds fly around: high the Yellow-legged gulls, with their expression of everlasting disappointment. Down the shearwaters, elegant, dancing over the water like a kite, trying to catch some fish. They seem such graceful birds then! Well, it is normal: they spend the most of their lives flying or resting on the waters, no terrestrial birds they are. Maybe that explains why the sailors did not know that those birds, that they saw dancing almost every day, were the same ones that during March nights awake the sleepy darkness with their screams. Because it is in March when their breeding season starts, so to their narrow holes on their rocky islands they go. And once there you can tell: they are not elegant, nor grateful dancers. They might remind of drunks dressed up in brownish coat and white shirt trying to make their way back home. Their long wings that allowed them to play with the wind are now a heavy burden. Their legs are too far back to be useful for walking. But you cannot incubate an egg on the water, that skill has not yet been developed by any bird. Luckily, the islands of Lastovo archipelago offer them a safe place for their clumsiness. Small, rocky, uninhabited by humans nor any other predators. Well, at least it used to be like that. Times change and so do the circumstances. And now these multifaceted elegant/clumsy birds face unwanted guests on their rocky islands: rats. “How” would you ask “do rats arrive to uninhabited islands in the middle of the Adriatic Sea?”. At least, that I asked. “Swimming!” is the answer. They swim from human populated islands to others. Why be surprised? They are rats, they are capable of quite surprising things, colonizing islands should not be the greatest. Although some islands they reach traveling as stowaways on boats. This way is how they reach Lastovo in first place. But once there, what do they eat? They have several options: olive seeds, plant bulbs, flowers, shearwaters eggs and shearwaters chicks. And since shearwaters are not used to having natural predators, they do not know how to defend their egg, of which they only produce maximum one per year, nor their chick. But rats have been around since the Greeks, traveling on their boats. So, what other factors has caused that, nowadays, Scopoli’s and Yelkouan shearwaters of Lastovo are considered threatened species? Here we humans enter, as usual: overfishing, polluting the seas, the danger of ending up as bycatch and also light pollution, that can confuse young shearwaters on their first flight.

However, is it strange to realize how we people perceive this word “Threatened”, when it refers to some species that we are familiar with. We can compare it to how we look at our parents: we spent our first years with them, and for our eyes, they never get older. But at a certain point, we leave our house for a long period. To go volunteering abroad, perhaps, and when we go back home, we suddenly realize that the two beloved people that receive us are completely different: how could we never notice their dark hair turning grey or declining? Or their movements losing precision? Or that tired wisdom in their eyes? It is human to feel like the things that have always been on our side would never change, nor disappear. Ask this question to yourselves: how did the birds of your city/village change since you were a child full of curiosity? Are there as many sparrows as before? Or all those gulls, when did they started to colonize the cities? Maybe you never noticed any change, because it is difficult to realize the slow changes of our routine. The same can be applied to Lastovo sailors and fishermen: if you ask them, they would probably tell you that there is no threat to shearwaters the archipelago, that they have been there since ever, flying incessantly during the day; hauntingly screaming during the night, and that they will continue to do so.

Probably one of the major challenges for nature is to convince people living near that there are actual threats. A lot of times these people (they can be us) are not malicious, but the closer we are, the more we lose the perspective, because it is difficult to grasp the whole picture. Sometimes we need to take some steps back in order to see properly; or we need some outsider to point out the problem (although we are not usually willing to accept an outsider’s point of view). However, sometimes we need even something more basic: simply to watch. To pay attention to what surrounds us, to realize that we share our quotidian spaces with other living beings just living their lives as well as we do, and that this puts a responsibility on us: towards other animals, but also towards the future human generations in order for them to keep experiencing the same world full of legends and reality as we enjoy today. To fear the haunted islands during the spring nights; to see the shearwaters dancing over the sea; to laugh at them when they trip over the rocks.

Aida Martinez Suarez is a volunteer on the project Birds of a feather flock together, which brings together four foreign volunteers coming from four different countries. Over the next ten months volunteers will help with conservation operations for endangered seabird population on Lastovo Island, participate in the activities of Beli Visitor Centre and Rescue Centre for Griffon Vultures, assist in bird ringing at the ornithological camp at Ucka Nature Park and organise various educational activities in Zagreb. The project is funded by the European Solidarity Corps programme.